Yes, that’s my avatar right there, lying on the ground. He doesn’t have a name though, but for now, I refer to him as the loner, since that’s the faction he hails from. Upon the advice of some gopnik geezer met a while back. He made his way to the Jupiter region, with intentions to perform another tour through the northern tunnels. Apparently, there is something hidden down there, that could shed light on the whereabouts of a stalker called Strelok. Unfortunately, mistakes were made, and now my loner is dead.

To be fair, his story should have ended many times before. Especially after his meeting with the Doc. But, with a bit of perseverance, and the magic of quick save. He managed to survive yet another harrowing journey through this hellish zone, to safety.

“Hippocratic Oath my ass.” The loner mumbled to himself, as he dragged his near broken soul through the stronghold entrance, and straight to the infirmary, wasting little time on pleasantries as he sought aid.

“So you met with the Doc,” the medic asked nonchalantly, as he busied himself about the room.

The loner, to his credit, feebly crawled onto the cot by the corner. Shivering, despite the afternoon humidity. He could feel the bouquet of toxicity he was exposed to, coursing throughout and trembled as he nodded his response.

“And what do you think of him,” came the next question.

As the cold needle penetrated his already sensitive skin, the loner winced painfully, though he was grateful for its payload.

“Not much at all,” was all he could slur, before drifting blissfully off to sleep.

The loner remained at the stronghold for a short while after that. And with a small portion of his earnings, took the plunge, and made that investment into the exo-skeleton he yearned for.

“Finally, I am now a stalker to be reckoned with.” He said this grinning from ear to ear.

The initial excitement that came with having a new toy, was quickly overshadowed by the mounting cost imposed, as a result of the subsequent upgrades, the effort required to find said items for the upgrades, and the overall results. No disrespect intended towards the hard working engineers out there, but would it be possible to allow us to take the helmet off? That would be nice. Thanks.

Mixed, that’s how he would describe his life with the exo thus far. On one hand, the loner found traveling the zone a far better experience. The ability to sprint non-stop across territories, absorb impact with the protection of a tank, and that dramatic increase in carry weight, more than solidified the armours worth. It was like nothing he had experienced before, and soon took his new gear north, to visit Agroprom and its tunnels.

That bandit army occupying the passages below never knew what hit them. Suddenly, out of nowhere, wrath showed up to their quiet little gathering unannounced, and wasn’t having any of their nonsense. In the loners defense, the bandits had opened up the discourse with the first volley of gunfire, forcing him to respond in kind. And perhaps emboldened by his recent exo acquisition, and the disproportionate power imbalance that came with it, the loner went on an uncharacteristically brutal rampage, as he pushed himself through the tunnels and towards where Strelok’s hideout was supposed to be. A shameless display of might I must say, but felt good nonetheless.

Alas, there is this overwhelming problem. All the loner can think about when performing casual activities in this suit, is this need for fresh air. And that constant reminder of his own breathing echoing into his head, just added to the discomfort. I suppose it could be something one would grow accustomed to. Only time would tell.

The other problem was the focus of his upgrades. More attention paid towards combat preparedness, and less on environmental hazards. Needless to say, with this suit and its limited enhancement slots available, he would have to avoid thermal, electrical and toxic areas like the plague. The loner wished he had paid more attention to his selections at the time.

Jupiter proved a bit more challenging, but at the moment, He held his position above the tunnel entrance, just east of the massive concrete cavity carved into the hillside. The loner peered intensely into his scope, and waited patiently, for someone to trigger the landmine carefully placed at the corner. But, no one came. Instead that monolith squad below, guarding the entrance to the tunnels, held their position, forcing the encounter he wanted to avoid. A clever move indeed.

One grenade bounced on top of the concrete and landed in the grass next to him. That prompted a quick shift towards the next corner for shelter. The other grenades tossed, prompted an immediate change in strategy, since dodging grenades all day was not a thing he had any intentions of doing. He had to take the fight to them, so he took that fight to the westen wall and confronted them head on.

Though the exo functioned as expected, the wear from small arms impact began to show as each member of the resistance would unleash a variety of munitions towards him, before falling limp to his twelve gauge responses. Soon, only the loner and his exo were left standing. All around him lay stalkers, mercilessly forced into permanent retirement. A brief moment of glory, his immediate reward. There was nothing at all to be proud of though, since these were fellow stalkers, defending what was theirs from the world, and it’s madness.

“Have I become that madness?” He stared aimlessly at the bodies laying at his feet, and suddenly that glory turned to shame.

As his rage subsided, and the phobias crawled back in, guilt made another appearance to further regrets, brought on by his emerging distress. The loner wished yet again for fresh air, only to remember, he cannot remove the damn helmet. A brief review of his equipment status, indicated enough damage to warrant a return to the train station for repairs as well as better prepare for the tunnels ahead. And since monolith loot is usually good loot, he meticulously picked through the dead, taking anything he could find, of value. He had hoped this new haul would cover the cost of services needed.

The loner never made it back to the station though. Way too engrossed in self indulgence, he simply forgot about that landmine laid earlier and wandered aimlessly into his own trap. The blast came as a shock to both the avatar and myself, flinging his form up to new heights, before crashing into an embarrassing mess. I suppose a fitting end, after such a barbaric performance.

Fortunately, There is a vested interest, in this Strelok storyline. And with a quick save, not too far behind, the loners story will continue.

MEME - Grocery delivery is a disappointment 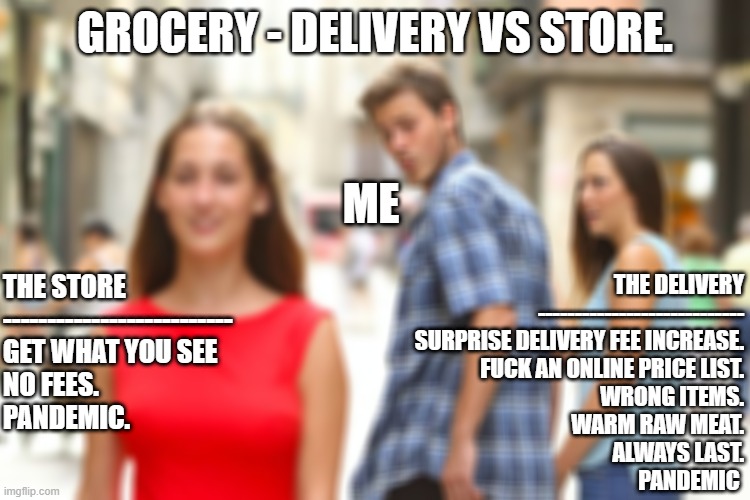 from Imgflip Meme Generator
Was really excited about grocery shopping online, not so anymore.
Right now risking pandemic at the grocery store, makes more sense than the delivery service being offered.