Did not expect to run into that many, not in the same place, especially not now. Looks like that stalker he was following felt the same. Two or more undead squads, just happen to cross paths at that moment, creating a serious hazard for both he and that stalker, as they wandered up the road. The loner counted about eight or nine zombies, all armed to their rotting teeth. Their attention was trained on that freedomite, whose disapproval was quickly silenced. Not much that stalker could do at this time, with a mere pistol. The loner kept himself low behind the guardrails and fired repeatedly into the mob. He fell about three, before their attention turned to him. As they absorbed his rounds hungrily, they began to close the distance, and return fire. Maybe he thought, he should have brought Chemist along.

Earlier that day the loner had applied the final piece of capacitance to his PDA. He gingerly flipped the device over and turned it on.

“Didn’t break it.” He exhaled a sigh of relief.

His device had just been upgraded to the anticipated latest version, happy days are here. He quickly tabbed between menus searching for obvious changes, there were none. He browsed the messaging area and saw no difference, then tabbed back to the map where he noticed a new icon. It was green and traveling a path south of the sawmill, clearly non faction but still friendly, he hoped.

The loner quickly prepared himself for travel. He would go out to scout the target and confirm that friendly status. Should the meetup ever go south, he wanted to have enough room in his backpack for the loot he would eventually take from their corpses. He then turned to his companion, Chemist, the name he went by, a lone stalker recruited yesterday.

“I need you to stay and guard this area.” The companion stared at him silently, then nodded.

This was not a task the loner was willing to share and that pride of lurkers crying far out in the distance made sharing the risk even less desirable. Despite his anxiety, he donned his helmet, disembarked the vessel and ran westwards towards the burnt village on the hill. He paused just south of the entrance by the hillside to surveyed the valley below. The device indicated the target was moving towards that dilapidated resort south of here. And there he was, another lone stalker marching along the edge of the lake, but where were his companions? A quick review of the message history, indicated a deadly encounter with an undead mob occurred. It seems his companions did not survive.

Moment of truth, he thought, time to play a round of friend or foe. The loner stood up and quickly scanned the road ahead, then hurried along the side of the hill to catch up with that traveler.

He landed hard and it hurt, not just physically. The loner was so engrossed with his meeting, he didn’t see the crack in the ground and tumbled awkwardly into the cave below.

“Are you kidding me!” He screamed, not wanting to believe what just happened.

The loner sat angrily on the floor. Cursing his clumsy self while nursing wounds. It was dark in this hole, save for that single glowing spot next to the crack where he fell through. Just then, a massive fireball floating lazily along a parallel path could be heard. He had an idea where he was, just not sure how to get out. He then turned to his night vision and began to search. Found two paths, one up ahead, the other behind. Both blocked entirely by a coating of anomalous fields. He looked up at the hole he fell through, too high for him to reach. He then planted himself in front of one of the anomalous fields, furious and frustrated. Rage began to rear its ugly head. The loner was not at all happy.

A stalker once told him, that it was possible to run through an anomaly field, but the timing had to be precise. The sweet spot he said, is that moment after a field reacts to disturbances. The loner tossed bolts after bolts at it, triggering reactions while searching in vain for that spot of truth. He saw none of it and feared the stalker may have been mocking his ignorance that day. Hard to tell when one becomes the useful idiot nowadays, every stalker for themselves right?

“Praise Monolith.” He whispered, then chuckled.

He then whipped out his detector, might as well see if any treasures were trapped in here with him. Sure enough, that glowing light by the roof turned out to be an actual artifact, a sun artifact to be precise, not radioactive but will fetch a decent price with vendors. Unfortunately, it was also too high to reach. He pointed his rifle at the thing and fired one shot. The bullet connected knocking the artifact from the roof of the cave, down into that anomaly infested rear passage.

The artifact appeared to mock him, as it slowly rolled itself into the deadly field. The loner moaned his disappointment, there wasn’t much else he could do, and shooting it once more would push it further in. He sighed about as heavily as a man trapped in a cave, with an artifact he can never reach would.

“How about that?” He began to pace back and forth. “Finally kick something off the bucket list and what do you do?” His pace became frantic.

“You fall into a hole. You idiot!”

Just then the artifact exploded out of the anomalous field like a cannon. It zipped uncomfortably close to his mask, then wedged itself into the wall above the passage forward. When he approached the artifact, he then noticed another crack in the roof just above it. This one was barely visible, but more accessible. It was hidden right above the incline where the artifact embedded itself. The loner quickly bagged his prize, then checked his device.

The PDA showed the target had taken a break by the resort, there was still time, all he had to do was shimmy his way up the wall and escape. Way easier said than done, because even though he could negotiate the incline up to a point, every movement after that had him slipping and sliding back. He tried again and again until he found passage, then ever so gently, inched his way up towards the crack.

By the time the loner emerged from the hole, his object of interest was well on its way headed towards the Ranger station. The loner had little hope that stalker would stop at Skadovsk, that hasn’t been the trend of late.

“Must hurry” he sighed once more, then broke into a lively sprint towards the swamp.

That stalker is dead now, never did get to meet him. Shame he thought, then dismissed it as there were more pressing matters to attend to.

Five zombies were left and they were getting much closer. On his umpteenth reload, he wondered.

“Why is this rifle not set to automatic?”

He soon realized that tossing single rounds at an approaching mob was stupid, especially for a horrible shot. One minor adjustment, then he took aim and gently squeezed the trigger, spraying each target with short burst, and kept it up until there were no zombies left standing. The loner then moved his position to the opposite side of the road and braced for another ambush. There were no threats in sight but it still felt like he was being stalked. He had developed much respect for his paranoia and would often pay attention.

The multi-tool broke mid disassembly, leaving far too much weight to drag back to Skadovsk. The loner whined on for a bit as he loathed the idea of leaving so much loot behind. Finally, he messaged Chemist, his companion who was still back at Skadovsk. It was time for him to help.

Moving heavy loot is a task this loner is more than willing to share with his companion and gleefully tabbed back to the map to watch that yellow icon hurry towards his position. 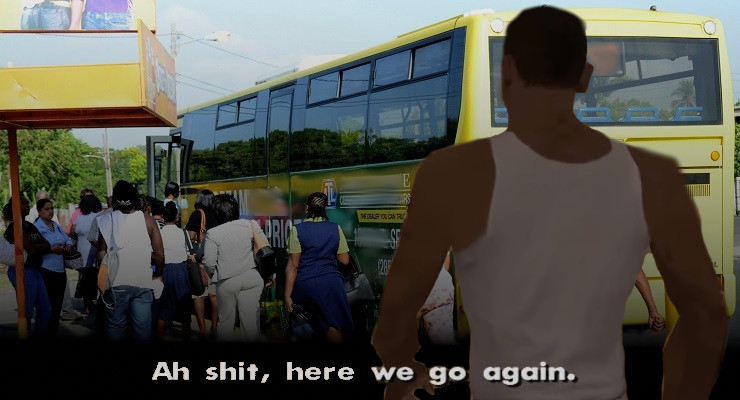 This Taxi vs JUTC faction war heating up.