“…I’ll take those four boxes.” I told Savva, then followed up by pointing to the stack of thirty nines.

Upon receipt, I gave the packages a quick once over then returned to where Shaggy was waiting in the marketplace. Had him follow me here to help investigate a couple locations. Also need to practice my companionship and this loner is a means. The gear I donated to him earlier left much to be desired. Though I resisted the urge to spend my own money. I soon broke down. Savva had an outfit available for a decent price. Beginners gear I muttered, seemed appropriate.

Earlier, we found ourselves east of the Hangar. There was mutant activity behind the concrete pipes, so I quietly lead Shaggy over to the hangar bay. “Wait here,” I signaled and cautiously approached the infestation outside. Soon there after I began harvesting from their corpses. That’s when I discovered the remains of fallen stalkers in the thick grass. I found a loner, another from clear sky and the officer that was often stationed here. I remembered the first time I met him. Always neutral, never hostile. I may have done a task or two, can’t be sure. He was now ladened with more loot than I could break down and carry. I quickly signaled for Shaggy to help and together we hauled everything back to the butcher to sell. We then visited the eastern anomaly field in search of artifacts. that yielded nothing. Another stalker beat us to it. 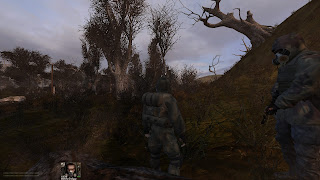 We kept traveling north and made our way across the Wild Territory and into Yantar. Our destination was the camp just outside the factory entrance. On our way we could hear a multitude of gunfire erupt from the lab west of here and the network lit up with distress calls galore. Though allies were under siege, we kept our heads down and traveled north along the eastern hillside. Suddenly, clouds overhead drew dark and thick. That was then followed by a sickening groan that echoed across regions. Sirens blared their warnings while stalkers raced towards shelter. We followed suite and took solace with the others in the sewer that runs under the main road. The earth shook violently. The storm near deafening. Everyone was on alert. Outside, we could hear the faint sounds of mutants roaming around emboldened by the chaos and searching for prey. Any of them could find the exposed entrances. I began to feel like I was pushing my luck. Yantar is notoriously hostile. There was no good reason to bring him here. Worse, the contents we recovered was not worth the risk.

Moments after the blowout passed we returned to Garbage, where dead weight was offloaded once more. We cut east through the hangar on our way to the open market place north of here. Liberating the contents of a container as we traveled through. Further north, a number of fractures were roaming up and down the side of the road. I tried to lead my companion on a wide berth in an attempt at avoiding confrontation. I may have issued the wrong command as he charged right at that mob anyways. Forcing me respond. Needless to say I was not happy about that.

At the open market, I handed him the outfit purchased from Savva, He suited up and then we spent the afternoon idling at the camp. Shaggy remained chill and I was grateful for that, as the only thing we had in common was our faction and survival. Also, having a language barrier wasn’t very helpful either. Stalkers come and go, often times leaving behind loot and I kept my eye on the network chatter looking for such opportunities. I noticed that bandits at the Cordon checkpoint had sent out a distress. They were currently under siege from a zombie horde. I made a mental note and added that position to my to do list.

The afternoon dragged on slowly and the bulk of the chatter involved regions I dared not visit accompanied. Normally I’d be knee deep in near death experiences. This was not that. I fired up one of my pre-rolled and handed the other to him. He lit up and causally toked away whilst I inhaled hungrily. Roaming with companions, especially someone as inexperienced as he, requires patience. I have the time.

We then traveled south along the main road dismissing the pockets of infestation that stood in our way. Wasn’t long before we reached our destination. The southern checkpoint was deserted save for the remains of bandits and a single zombie, all stripped of anything useful. Another stalker beat us again I noted. We scavenged around the area for a short while before visiting the anomaly field just west of here. That was also devoid of anything useful.

“There are stalkers wandering around, somewhere out there with my loot.” I quietly joked.

The sun began to set. It was time to go. Thought I heard the heavy breathing of a Bloodsucker somewhere off in the distance. I could be wrong, but that was more than enough. I hustled myself and my companion to the hidden passage west of here, right back to the farm in Cordon. 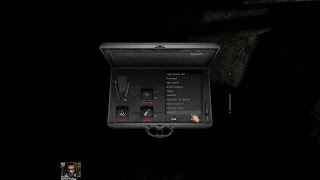 It was late and had no plans whatsoever to be outside. Already consider the day a success. My companion was still alive and collectively we earned enough to cover some cost. Next focus will be upgrades. I would like him to be as combat ready as possible and I may be able to craft the materials our technician needs. I settled in before my storage container. Opened it up and began doing my research.

The part of NPC companions in Divinity OS 1

I'm around 40 hours into the game, and was wondering if it is worth it to hire someone from the Hall of Heroes and forego Jahan or Wolgraff. How will it affect my gameplay,? Also, is it necessary to keep the companion at your side to trigger those NPC-specific quests?