It was barely audible but the nearby sound of shuffling made him pause and crouch low. He slowly scanned ahead panning north to south as he cautiously crawled forward through the field.

“I vote we turn around and go the other way,” anxiety whispered. “It’s the right thing to do you know.”

“Quiet,” said Rude. “I think that sound is coming from the lake.”

“Yes, but it is safer over there, at that station.”

As one of his active wingmen, anxiety’s warning came through loud and clear, he knew it was risky but kept pushing forward until finally, he saw movement across the lake. Counted four stalkers, two ecologists, two officers, all undead and armed. They hobbled along the narrow path that cut through the body of water just west of Yanov station, marching towards the shade tree, that sat prominently at the end. They were completely unaware of his presence, and he wanted to keep it that way.

This is his first encounter with the undead since waking up in Jupiter. The majority of his afternoon, was spent roaming the area east of the station, looking for abandoned loot to claim. Wasn’t much to find though, some smokes here, a handful of components there, and some parts harvested from an unfortunate lurker. He did find food, some good news. Still light on goods for trade and wanted more, he eyed that squad as resource and neutralizing them, a public service.

There is this desire to engage that group with the least amount of risk possible, so he searched for anything that could be used as a barrier between himself and that undead squad. The surrounding field was too exposed he thought, nothing but grass, bushes and reeds bordering the lake. He was not at all confident he could pick them off from this distance, not with this weapon and any response could easily end fatal. Shadowing them as they worked their way westward was another idea. There, rubble lay strewn throughout that area providing adequate cover for an ambush. Any solid structure would do fine.

“…but are you prepared to be ambushed yourself” his anxiety was mocking him now.

“No, no I am not,” was Rudes reply, then he shook his head, thankful for the reminder.

This is the zone he remembered, any passing predator could themselves see him as an opportunity, and since it is taking that zombie squad a while to cover ground, it would be best to act now while conditions were good. Another idea made itself available, and he picked himself up and began to slowly circle the lake in the opposite direction. He worked his way around to the beginning of the path the zombies were traveling, then trailed them from behind. Unless provoked, the undead will remain docile, so he kept his distance, waiting for that opportune moment to strike.

“You do not have the correct tools,” came the nag.

“Christ, you are right!”

That made him pause for a moment. Without the multi-tool to break equipment down, he would have to travel back and forth numerous times to haul everything or worse, leave some behind. This was not well planned he realized but was too invested in the moment to back off. Now high on adrenaline and itching for confrontation, he seized the moment and charged towards the other side of the tree.

“Too late,” he mumbled. “This ambush is going down.” He checked his weapon, leaned out and began shooting.

The fire fight didn’t last long and that tree proved an excellent accessory, for the old duck and cover hustle. Loot wasn’t bad either, he wagered he had gathered enough to purchase the tool needed to disassemble the heavier stuff when he returned. There was no time to waste, he hurried towards the station with as much as he could carry, pleased with himself. He once again felt his chance for survival had improved a little and looked forward to more adventuring here in Jupiter.

Full service gas station in my town with a rude employee

There is a full service gas station in my small central Massachusetts town. They have the cheapest prices in my area, however there is one employee that I cannot stand. Now I’m not sure if this truly belongs in this subreddit, however what he does mildly infuriates me personally. When you pull [More]

Have yet to play Dead Air, I hear it is fantastic though, just poking fun guys. 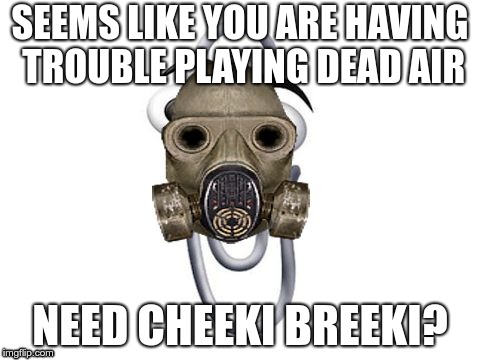