He was exhausted when he crashed through the door and into the deserted Laundromat. So focused on his return, he did not notice his companion apparition, was nowhere to be seen,

“All by myself again,” he hummed, just before the sadness overwhelmed him. “This time I will die alone.”

Lenny it seems didn’t care much for that foreplay, you know the one, that emotional ride, just before you surrender your soul.

“At least I have vodka,” he wheezed somewhat content, as he shuffled his feeble body across the room. “It may taste like rancid gasoline, but thank the Zone, it gets the job done.”

Fortunately, the empty Laundromat had no opinion, offered no commentary and watched silently as he hobbled along leaving a trail of blood behind with each step. From his backpack, he grabbed a bottle and cracked it open, plopped himself to the ground, then slowly ingested the questionable nectar, as if it were a harsh delicacy.

Next he reached for the harmonica. This thing was never an instrument of interest, and he had no idea why it was always among his belongings. Lately he would play that one melody, the same one belted out back at the entrance to the hideout, the melody he often hears at campfires throughout the zone, the melody he chose to play now before the undead arrives. He moistened his lips and gently blew into the piece.

Earlier at the hideout, Rude and his companion found themselves perched on top of the overhang to the entrance. Fortunately, none of the armed walkers were present, so Lenny busied himself by the edge pretending to count heads.

“I see what you are doing there, aggro-ing that mob with butchered music. Seems like a terrible idea. What’s next, a jig? Maybe, a lapdance?”

“Not sure,” was Rudes response, as he jostled back and forth along the top of the structure, just in case something somewhere, began to shoot.

“I think it will attract the bulk of them close to this overhang, leaving less to deal with out there.” He then continued playing, as It felt like the right thing to do.

His terrible rendition seems to have had its intended effect, as the crowd below drew close. This mob consisted of mostly fractures, which were slow and can be avoided. The real serious players seem to have gone in search of better game, he could still hear gunfire in the distance, more unfortunate stalkers he supposed.

“Rude.” The apparition interrupted.” I realize your life is on the line. But this is exciting. Think you’ll make it?”

Rude was getting himself pumped and ready for his morning run. It’s all the rage you know. Need to lose weight, go for that run. Need to get food, go for that run. Mutants on your tail, consider upgrading to the marathon package as it is the better choice.

The wave of undead flowing out of the fog towards the covering, where he performed his awful serenade, offered a small window of opportunity and he took full advantage. And with gusto, jumped into the brief opening created by that mobs movement, knocking a number of the undead to the ground in the process. He then moved decisively, dodging from side to side, pushing the curious away as he forced a path through the crowd. Shooting at them was a waste, too many targets, and not enough bullets. Rude was confident he would survive this moment. And so he did.

“You lucky fool,” Lenny commented as it followed along closely.

Though fatigue was threatening, he never stopped running, and raced breathlessly along the apartments lining the main road running through the Outskirts. He ran with his pistol brandished, even though he understood how useless it was. Lenny floated alongside and kept pace as they pushed towards their destination.

Upon arrival, he found the laundromat deserted, but did recover a small cache of vodka in storage, along with a few packs of smokes and a kit he could flip for some money with the trader.

“Such an incredible experience,” said Lenny.

Its sense of excitement was an apt reflection of Rudes’ disposition at that time.

“Shall we do that again,” Lenny then asked.

Rude turned to his companion and responded with a wry grin. “No time like the present.” Then stuffed the contents of the container into his backpack and immediately hurried out of the laundromat headed further south.

Outside the bookstore, where the trader had elected to set up his operation, was unusually quiet. Not so on the inside, for the moment he stepped up to the front door, he was met with a hail of gunfire, courtesy of the armed undead stalkers that had taken over the building. The trail of dead bodies leading up to the entrance should have been enough of a clue. He could have shown just a bit more caution upon approach.

Too little too late, too bad so sad.

The lonely laundromat began to do a little dance as the vodka started to kick in.

As he watched the room sway, he wondered. “Is LSD in vodka a thing here?” Then rubbed his eyes slowly wishing for his comforts return.

The room remained cold, unfriendly and though filthy, felt sterile and lifeless. Luckily, it is still quiet outside the building, that mob had yet to arrive. He took another long swig from the bottle, grimacing twice in the process, once for the wounds that riddled his body, the other for the clear fluid burning the soft passage down his throat.

“Lenny, where are you?” Rude coughed violently for a few, then closed his eyes.

He should have died right then and there but didn’t. He managed the return to the laundromat, now drunk. He understood that the mob left behind was trailing and would be here soon, that if he died, he would once again be resurrected elsewhere.

The knowledge hurt, but not as much as being abandoned by a friend. He drained that first bottle, shattered it against the wall across the room and blindly reached for another.

“Oh quit being such a drama queen!” It was Lenny and he was back.

Rude slowly opened his eyes, and not only was the laundromat still doing its dance, his companion apparition was doing something similar, over by the bunk beds.

“This vodka is no joke,” he mused, as he looked up towards his once missing companion.

“Better pucker up sweetie.” Lenny said, as it motioned towards the door. “Looks like your guests have arrived, and it’s time for you to play host.”

Payment through Paypal (USD) using Good & Services option. Not accepting other type of payment (bitcoin, Venmo, etc). If you want to pay using F&F option fees are on your side. (I'm from EU). 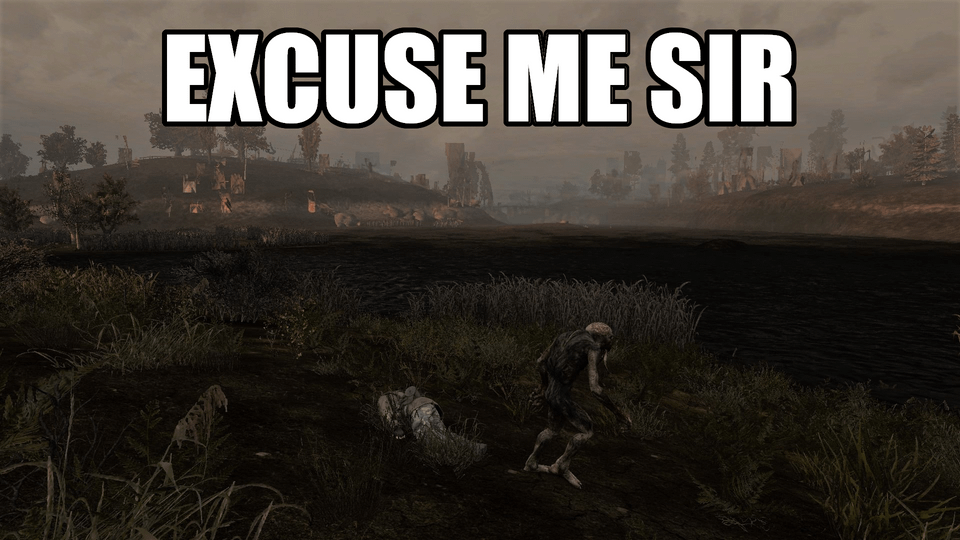 Roaming around the zone can lead to unexpected results. Below you see a loner in his native just died pose.
Impressive indeed.

Excuse me sir... from r/stalker