An old laundromat turned base, that’s what this place has become. Two stories of often times disputed territory. He suspected it was once a busy establishment back in the day, before all this zone nonsense became a thing. On good days, this is a safe place to be, especially with companions around. Not so now, since the entire area has turned into a feeding ground for some of the zones’ finest predators, and a few still know how to use doors.

The important thing here to note, is the loner never planned on leaving the premises at all, and why bother? He no longer cared for his existence and had resigned himself to a fresh start in the zone.

Then came the return of his missing apparition, and despite being, what he thought, a figment of his imagination, proved itself a source of motivation, putting survival back on the table. Unlike stalker companions, Lenny never gets in the way, it never steals and never affects his reputation. It can’t fight or carry load, can’t even act as a decent lookout, Lenny simply exists, for reasons not yet disclosed. Lenny was also learning, and would often feed on Rudes suppressed emotions and thoughts. There is no privacy at all with this one.

“It will do fine,” Rude shrugged, before turning his questionable attention to his guests.

It wasn’t the mob of undead he was expecting, the walkers simply trickled in one by one. Lenny remained on top of the bunk beds at the far corner of the room observing events as they unfold. It watched intently as the stalker vessel it shadowed, stumble towards the adjacent room, to put some concrete between the arrivals and himself. He clearly should not have had that much to drink and is now paying the price.

Rudes early visit to the local trader nearly cost him his life. Not only was he denied access to much-needed supplies, he returned to the laundromat a bullet riddled mess, crying over lost companionship, while easing the grief with vodka. A big problem, now that walkers are here.

Fractures were the first to arrive. These require a few extra rounds to terminate. That mutation comes packaged with a near Kevlar like layer of protection, double tap headshots are the way to go.

With paltry munitions supply on hand, it became time to put in play the low budget take down routine for fractures, it goes as follows: head shot to drop, then poke them with a blade until satisfied, rinse repeat. The challenge right now, is to accomplish that dance while still intoxicated.

Standing was a challenge, even with the wall providing stability. The laundromats sway caused by the alcohol, never once settled, and try as he may, he could not catch that rhythm. Both Lenny and he found this attempt at steadying himself amusing, and both chuckled simultaneously.

The first guest through the door shuffled itself towards where Rude stood waiting. It was allowed to come close, so close Rude thought he could smell old slavic aftershave imbued deep within the rot. He also noticed small pockets of flesh throbbing steadily through its gaping wounds, something inside was still pumping life.

The fracture then pivoted one arm back, and was about to strike when a single round pierced its left eye, causing it to stagger and tumble backwards to the floor. It looked dead, they all do at first. Then as was planned, Rude fumbled for his knife, and fell on top of the walkers body, stabbing at it repeatedly. He then rolled over to his side, slowly raised his pistol, and sent a volley of wild rounds in the direction of another fracture, as it ushered itself towards him.

He squeezed and squeezed until one shot connected with the creatures face. It too collapsed to the floor a little further away, forcing Rude to grudgingly vacate the safety of the entryway, something he was not happy about. The man stood up, took a few steps forward, dropped back to his knees, and crawled as quickly as he could towards his target. He stabbed at it relentlessly. Then collapsed exhausted on top, to catch his breath.

“Exactly how many bottles did you drink,” Lenny asked, a vain attempt at lightening the mood. “Did not know you were such a lightweight.”

“Vodka does have some kick,” came Rudes response. “I’ve also lost a lot of blood, In case you haven’t noticed.”

After what became a quick frisk, he found a single can of energy drink, and consumed it while shuffling as fast as he could, back to the safety of the entryway.

Moments later, another undead appeared, and it wasted no time releasing round after round at Rudes’ last known position. It paused, turned its attention to the entryway and hobbled towards it. That undead soul never saw it coming, the moment it closed the distance, Rude stumbled from cover with a slurred hello, followed by a clean shot to the creatures face. Body looted seconds after hitting the ground, recovering a worn shotgun, added munitions and cigarettes.

“I don’t know how to explain,” Lenny replied as it shifted to the side closest to the entryway.

“Mother beckoned, and I had to go.” Lenny then paused as it watched more undead enter the room. “I now find you here, looking a mess, and still alive. You are indeed a lucky one.”

Who is mother he wondered, and why lucky? He had questions, but thought best to leave them for later, as there were more pressing matters to attend to.

His fortune took a turn for the better when he discovered a set of health kits among items looted from his undead challengers. And without hesitation, proceeded with each kit’s application. The injected cocktail coursed its way throughout his body, delivering much needed warmth and comfort. His wounds began to tremble as expelled and unwanted fragments, were replaced with as much native tissue as the science behind each kit could render. It left a pus like coating of sweat all over his body, that seeped into his gear. The smell was putrid, a bath became essential.

The hold vodka had on him lifted, offering him some clarity, the time to get as far away from this place, now at hand. He thought of that basement at the department store west of here. There he hoped he would find refuge. At least give him some time to comfortably peruse the collection of diaries, documents and devices harvested from these unfortunate souls. Perhaps he could learn about the recently put to rest. There is a story there for sure.

Back to Deviluke this week. I promise, the story will pick up and get exciting, but before I can get there, I gotta set the stage. A few more familiar faces will show up in this one, and my lack of skill in coming up with original names [More] 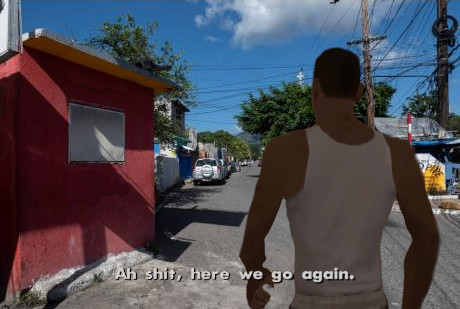 After reading the summary:

(Before the meme dies) - Carl visits Standpipe from r/Jamaica