Lenny was not lying, as the words to describe its absence had not registered in their shared vocab. It would learn soon enough, though must stay vigil.

It remained stationed by the bunk beds, and watched as the undead assault, trickle into the room. And though unintended, delivered much-needed supplies to this intoxicated vessel stumbling around below. Mental stability, clearly not this stalkers’ strong point. The man understood the implications of vodka consumption and completely embraced its effect. Now, he intends to engage in a heedless but entertaining battle for survival. Fortunately his foes are few.

It was at that moment of Rudes interruption at the traders, by that hail of undead surprise, when Mother called, and it was pulled away from the zone. Its umbilical tugged and pulsed gently, urging a quick return while the soft window to Rude and the Outskirts, terminated itself.

It then entered a world of pure darkness littered by millions of strands of other umbilical vesicles reaching from the shimmering mass at the center, to the edge, where they all congregated. The mass beckoned for its return with a sense of urgency. Protest was futile.

Something else was strange. It was the only one being pulled back at the moment. The others were all extended out to the shell shadowing their vessels as usual, was there something wrong it wondered.

It had already acknowledged the disorder exposed to, while shadowing Rude. Somehow, that stalkers crazy, crossed barriers and adapted itself affecting daily routines with bothersome emotions.

It is rare for such a spread to occur. Though, there are others with their barriers crossed, that continue with their operations uninterrupted, to this very moment. Could this be the reason for the recall? Will this be terminated also? It never questioned the decisions of the mass but it began to experience dread, and lingered within that moment.

As it drifted, it imaged the zone itself with its many flaws, the main reason we exist. Maintain the zone and observe the vessels. There are occasions when the zone would break, we are the entities that help with the restore. Many vessels never return after such events, but the consciousness has imbued those that do with immensities. Now each vessel is assigned an imaginary, and are shadowed throughout their entire existence.

“I am Rudes sole assigned, I pray nothing is wrong.” This was its mantra, as it continued the drift.

The zones’ existence depends on stalkers, the more that participate, the stronger the zone grows, but to what end? Another unknown. It has shadowed many vessels throughout its existence. Barriers were never broken, there was never a need to reach out.

At first, it appeared to be the ramblings, and outbursts of another stalker gone mad. Moments of passionate discourse, vented to no one in particular. After a few life cycles, and on a long journey through the Darkscape, Rude abruptly faced it to direct his frustration.

“What are you, and what do you want?” He continued. “Can you do anything other than follow me around?”

It was taken aback by that encounter. How long did the vessel know?

The infection became apparent at that moment. Barriers had been crossed. The thing that made him Rude had spread, and clung to its form. Shock, surprise and a other emotions weighed heavy, and grew difficult to contain. It did not understand the changes then, but it glowed excitedly nonetheless. The vessel nodded his approval at the glow, grinned and continued on his way as confused as he was amused.

The massive consciousness did nothing but study the tiny worker upon arrival. It pulsed, throbbed and swayed gently as if breathing occurs through each and every facet visible. When It grew satisfied knowing that the crossed barrier, was of no threat to the others. The mass released its tiny worker, back to the zone, and continued with other matters.

“Lenny, you still with me,” Rude called out, as the health kit recently administered, began to circulate. The man needed a moment to absorb the physical and psychological changes experienced during the process, and hustled himself further into the adjacent room to buy time.

Meanwhile, two new fractures entered the room. They were stuck walking unintended interference into each other, making slow and comical progression, towards where Rude stood poised. Two shots rang out, both fell to the floor, followed by a few more rounds, placed into their skulls. And why not, his munitions cache grew steadily over time, leaving the laundromats floor strewn with the remains of the undead and a few broken bottles of vodka. The smell was unbearable and it was time to go.

One of the residual effects of the cocktail he administered, is this intense burst of energy. His mind raced as he stormed towards the door, pumped and ever so focused on his next move. He was convinced he had collected enough resources, to survive a bit longer. Perhaps he could make it back to the hideout or take his chances with the tunnels. Yes, he would keep fighting, he will find the answers and he will find this Strelok.

“So, are we leaving now?” Lenny asked.

There are many problems with Oddity’s double standards. The one that’s the most blatant, and the one that I will limit my discussion to, is related to its overt support of pejorism. Full disclosure: I’m one of those people who firmly believes that the best way to curate conversations about Oddity’s coldhearted [More] 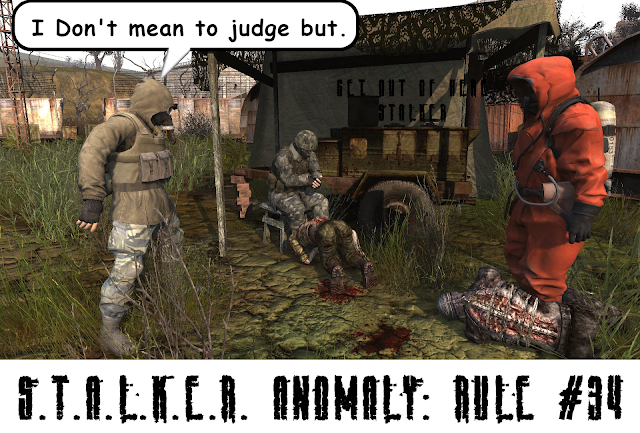