The first one dropped instantly when he opened fire, missing the other, allowing it to slip by unharmed, rushing towards him. Upon arrival, it bit into his leg, while tearing viciously at his fatigues. The man screamed, like a child surprised and dodged as quickly as he could to the side, at the same time mercilessly unloading his pistol into the creature, until the chamber responded with that familiar click.

“Crap!” He reached for his machine gun, but alas not fast enough.

The creature, unfazed by its wounds pivoted itself and lunged at its target, scratching feebly at his chest, before crashing dead to his feet. The stalker then followed suit, collapsing to the ground right next to them. There he began rummaging through his backpack, searching for kits foolishly left inside.

Cats, this stalker has come to learn, are not ones to be trifled with. Didn’t see or hear them coming, not until it was too late. They must have caught wind of him, but how? After loosening his gear for better access, a hasty application of bandages and stims, the next act to follow.

“Hold up.” He winced visibly, after removing his helmet. “Did that stench really come from me?” Wincing once again after confirming.

“Well this explains a lot.” Disgust overwhelmed him as he analyzed the heady bouquet. “Just about anyone can smell this coming from hours, maybe days away.”

Hygiene in the zone, is entirely dependent on the elements, with the outdoors the only game in play. None of the buildings that survived the zones’ ire have working bathrooms, or even running water for that matter, at least none that he has seen. So, this stalker does his business on the go. And when the need comes up, makes a stop, with the number two a squat, followed by that satisfying plop. The zone is the type of place that takes care of its own, since all things dead, decayed, forgotten and left behind, eventually gets claimed, by parasites he never sees.

As for the rainy days that often persists across regions. They provide that refresher, each and every stalker worth their salt savors. It hasn’t rained in a number of days though, which would explain the current state of affairs. Stalkers remain pickling in their outfits for what seems like forever, protected by fancy devices, leaving plumes of foul musk a thing for the latter of the group, those brave souls without breathers. And judging by the limited nutrition available, canned goods, non-perishables and questionable local delights, only the zone knows what foul fragrances these vagabonds trail when roaming.

Another gust pushed through the field, across where he lay, on to the wooded area, carrying along with it traces of his olfactory shame. While easing debris scattered loose from the skirmish, into an anomaly located not too far behind, causing small pockets of implosions to occur. The man slowly turned his head for a better look. Though that aberration of physics occupied a small area, the strange energy churning within was still powerful enough to crush anything that ventured inside.

“A few more steps back,” he observed. “And that would have been me. Another forgotten mess, for parasites to claim.”

Finally, he sat upright, taking time to survey the surrounding landscape. There he found a flock of crows flying around, and nothing else of interest. Once satisfied, lit the cigarette fished from his backpack, inhaling the resulting smoke greedily.

“Western tobacco,” the man had to admit. “Just taste great.”

With that still lit fag held between his teeth, he pulled the knife from its sheath, carefully flipping the lifeless mutant bodies back and forth to examine them. Found their claws were undamaged, the rest though had seen better days.

Since a paltry yield was to be expected, he wondered if butchering them was worth the effort. The actual reward would come later from that trader, when he returns south. The man took another drag from the cigarette, shrugged his indifference, then plunged the blade into the first of his kill.

“Lovely.” Another slow drag, but this one encouraged by frustration. “You forgot to sharpen the damn blade, you Idiot.”

A once simple task made more tedious, because of his carelessness. He exhaled deeply, and stared at the partially embedded knife, debating his next move. Meanwhile, the disturbance behind calmed itself to a steady hum, acting as a friendly reminder, to stay vigil and not tarry too long.

The forest up ahead began to sway gently, acknowledging the wind’s presence, allowing for a moment’s glimpse of the road that was not too far behind. There, he caught sight of some movement. Looked like another squad on the go, but could not tell if they were friend or foe. Not that it really mattered, since they were all running away towards the checkpoint at the end.

“Oh come on,” he yelled out. “It’s not that bad.” Smelling himself once more to be sure, indeed his odor was foul, but not ‘run the hell away’ foul.

Suddenly, and without notice, the flock of birds that kept him company, left the area in a swoop, all rushing towards the woods.

“What the hell?” His visible confusion, followed by concern.

He exhaled another plume, and took his final drag before extinguishing it on the cats body. Soon the winds gust began to grow strong, turning the anomaly behind, into a constantly implosive entity. The man slowly stood up for a better view, searching high and low, for what he wasn’t sure. It was daylights rapid retreat, followed by deep rumblings from below his feet that finally clued him in.

“Oh boy.” Another good reason to panic, has arrived.

With equipment in hand, the man sped hastily towards the nearest shelter he could find, accompanied closely by that panic inducing alert blaring off in the distance. He charged through the grassy slope, crashing clumsily into foliage that got in the way. He huffed, and puffed, cursing at every cigarette ever consumed, while pushing hard to keep pace with the looming countdown. Soon his laboured breathing took control and callously began threatening to strand him with fatigue.

“Not amusing,” the stalker rebelled, turning desperately to the collection of stimulants on hand, while coaxing himself onward.

The duration of the blowout was spent alone catching his breath in the back, his mind reeling from the assortment of drugs recently consumed. Fortunately, there was no need to socialize since he had nothing to trade or questions to ask. And though safely indoors, the man kept his helmet firmly in place. Filtered air he supposed, a better option than the funk he imagined exist out there. This newfound awareness of his flagrant inattention to detail, grew ever so challenging to suppress. His body echoed the discomfort felt while his mind danced endlessly around the topic. That all consuming feeling of filth, the shame of it all, what must everyone think? You earn the respect of factions, only to blind them with this rancid stink. The man waited impatiently for the blowout to end, rocking back and forth, mumbling an ad hoc prayer to the zone, begging for rains return. Meanwhile, a small burst of laughter erupted from a squad chatting close to the entrance.

“Are they laughing at me?” His discomfort grew near intolerable.

The downpour that followed was a welcome relief. After leaving the farm, he marched himself south through the rainfall, headed towards the village. Along the way he paused at a secluded camp, quietly removed his gear, and began to scrub his bareness with rags salvaged from loot. And since soap isn’t a thing one can find in the zone, a cheap bottle of vodka became the go to body wash of choice. The man carefully poured that clear liquid over himself, but the attempt to avoid his wounds failed miserably, causing him to utter a series of painful gasps, decorated by an assortment of colorful references. Despite that nagging pain from his accidental spill, he continued with the cleansing. It was time to correct the terrible results of his awful neglect. Time to turn over a new leaf.

“I suppose mutant fat could be used to make soap.” An attempt at breaking his current obsession, while emptying the bottle onto his scalp and working it through.

“How does one make soap anyway?” He pondered this compulsively for the duration of the shower, as if other stalkers actually cared. 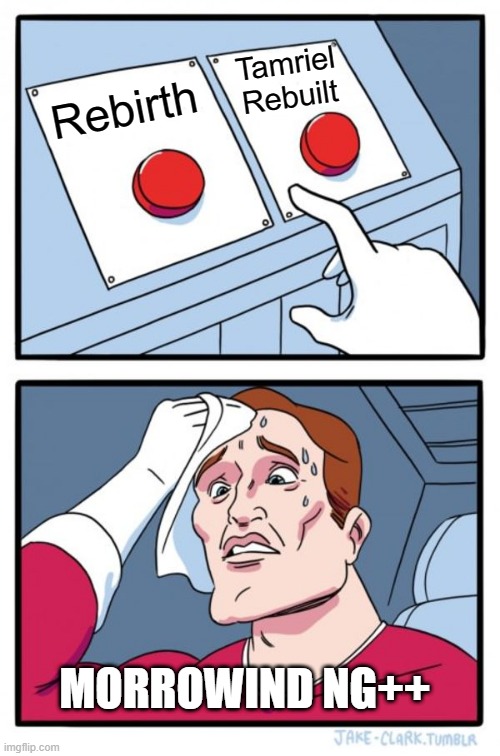 Decided to go with Tamriel Rebuilt and slowly craft an alternate Rebirth experience from existing MODS.